The Bear Paws we created for this Interact Commercial were worn and performed live, while motion sensors hidden inside our blue screen bear suit recorded the actors body movement. Our physical paws allowed for items to be interacted with directly on camera, and was partnered with a CG bear overlay guided by the actors motion recordings in post. This method was used again for a Shreddies commercial. Which resulted in a seamless transition from man to bear! 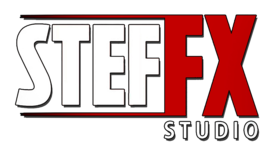